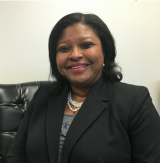 The speaker places ESSA pedagogy into practice for state, district, and school leaders in this highly engaging presentation. This session recognizes school and district improvement with a theory of action, logic models, and performance analysis that emphasize the use of evidence in decision-making throughout continuous improvement as a systemic and cyclical process. Specifically, this session builds capacity of leaders for evidence-based decision-making focused on strategic improvement processes. Objectives: 1) Increase awareness of opportunities for evidence-based school and district improvement in the context of ESSA. 2) Promote the elements of evidence-based decision-making to improve student outcomes that include performance analysis, context, implementation strategies, and desired outcomes. 3) Provide guidance for sustainability considerations that should inform choices of evidence-based interventions and progress monitoring strategies for continuous improvement.

Johnson’s focus is building leader capacity and providing resources and support to improve all schools, including those eligible for targeted and comprehensive assistance under the Every Student Succeeds Act (ESSA). Additionally, her work includes implementing a tiered, proactive system of supports, ensuring that all Georgia schools have resources they need and are improving student outcomes and expanding opportunities for increased student achievement. Dr. Johnson grew up in Chatom, Alabama and graduated from Washington County High School. She received her undergraduate degree from University of Alabama double majoring in Psychology and English. Additionally, she received a Master of Education degree from University of West Alabama and Educational Specialists’ degrees in both School Counseling and Educational Leadership from the University of South Alabama, and she completed her Doctor of Education Degree in Educational Leadership and Management. Her specialty areas are school transformation, rebuilding organizational norms, focusing on successful and measurable academic tactics, communicating a positive vision, and gaining support from key influencers. Her areas of specialty inform her leadership approach, as she views those factors as the foundation of academic and community success for all. Johnson views a collaborative school environment as the key to creating successful students and teachers. She believes partnerships with parents and community members are essential to enriching the educational experience for all stakeholders. Dr. Johnson earned her title as a turnaround leader in Georgia. In the past 15 of 25 years serving as an educator, she led the turnaround of Sequoyah Middle School, Jonesboro High School, and served as the "Mission Possible" turnaround principal of Maynard Jackson High School in Atlanta, Georgia. Prior to serving as a principal, Johnson was an assistant principal on Morrow High School’s turnaround team in Clayton County where the Superintendent promoted her to a head principal's position after only 10 months. Experiences prior to her principal roles were teaching secondary language arts and serving as a school counselor. Johnson has been recognized and awarded for her leadership that promotes equity and access for students attending schools that has resulted in large increases in graduation rates, climate ratings, student performance on standardized exams, and college admission rates while closing the achievement gap for students in at-risk subgroup populations throughout her career as an educator. Johnson serves on the CCSSO (Council of Chief State School Officers) School Improvement Advisory, Georgia State Principals Center Advisory Board and formerly served on the Georgia Association of Secondary School Principal’s Board of Directors. Johnson also serves on Harvard University’s College of Education and Policy’s Proven Ground Round Table, which consists of national leaders who advise faculty and staff on program evaluation of projects impacting school and district effectiveness. Johnson received recognition from University of California Los Angeles professor and author Dr. Pedro Noguera in a recently published article for her practices defeating the odds and breaking barriers with education in her service to communities in need of transformation. Johnson has been recognized as an exemplary leader by Blue Ribbon Schools of Excellence, she is recognized as a Georgia Leadership Institute for School Improvement’s Power of 100 Leader, and in 2016 Fulton County Commissioners Office proclaimed March 16 as Stephanie Johnson Appreciation Day. Recognitions and awards follow: 2017 National Principal of the Year Finalist Runner-Up, 2016 Georgia Principal of the Year, 2017 Shining Star Leader of the Year Award, 2016 Atlanta Public School Principal of the Year, and in 2016 Georgia Secretary of State Brian Kemp proclaimed Johnson as an Outstanding Georgia Citizen and Goodwill Ambassador for the State. Other recent awards and recognitions also include the following: Georgia 2017 Servant Leader Award from Lt. Governor Casey Cagle, 2017 Greatest Influential Leader in Changing a Community Award from Georgia House of Representatives, 2017 Lifetime Memory Mission Award Recipient where she built a school in a community that did not have one in Rio Grande, Dominican Republic, 2016 Nation Builder Principal of the Year, 2016 APS Chief of Schools Principal Award Recipient, 2016 Live Healthy and Thrive Pinnacle Leader of the Year, 2015 Department of Defense Patriotic Employer of the Year, 2015 Georgia State Joe Richardson Leader of the Year, 2015 Principal Advisor for the United States Department of Education Turnaround Initiative with Deputy Secretary of Education James Cole, and 2014 Atlanta Families for Excellence in Education Principal of the Year Award. Johnson is a motivational speaker and presents key leadership and instructional strategies in workshops throughout the country. She has an extensive list of additional awards and recognitions. Dr. Johnson and her husband Gary Johnson are proud parents of three children - Taylor, Jacob, and Stephen. During her free time, Johnson enjoys volunteering with her church, spending time with family, attending University of Alabama athletic events, and reading educational text.