News From Others
ESSA’s Well-Rounded Education: An Education Commission of the States Special Report
by Admin 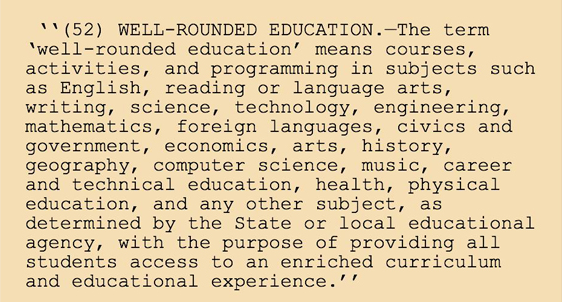 A common criticism of No Child Left Behind was its overemphasis on English language arts and mathematics as the only measures of student success. With the passage of ESSA, lawmakers sought to encourage states to re-establish what has been coined a "well-rounded education" for all students, which covers a wide selection of academic subjects, including the arts, humanities, sciences and social sciences, in addition to English language arts and mathematics.

As states engage stakeholders in planning for ESSA implementation, one frequent question is about the concept of a well-rounded education. This term is referenced more that 20 times and included in the majority of Titles in the Act. State education leaders want to know what constitutes a well-rounded education, how can they ensure students across their state have access to it, and how, if at all, the U.S. Department of Education plans to hold their state accountable to it.

This paper, from the Education Commission of the States, provides a brief overview of what is included in a well-rounded education and the opportunities that ESSA opens for states and districts to provide such an education to their students.

About the Author
Read next

U.S. Department of Education Releases “Return to School Roadmap” to Support Students, Schools, Educators, and Communities in Preparing for the 2021-2022 School Year